So, you may have noticed that things have been a little quiet around here of late.  Sorry about that, I’ve kind of been dropping the ball when it comes to blogging.

So where have I been?  Well, back in October I left my job of 12 years to move on to a new challenge.  Why did I finally decide to leave after 12 years?  Well, when I started at that firm, I had no DBA experience.  I had done some tech support for Informix, mostly for their I4GL and New Era programming languages, and I’d done some development in I4GL, but I wanted to move into database administration.  The firm was looking for someone with DBA experience with Informix, as well as knowledge of the I4GL language.  They took a chance on me and it worked out well for both of us.  Informix was eventually phased out in favor of Oracle, and then SQL Server.  Each new phase gave me an opportunity to expand my skill set.  It kept me challenged.

The thing about working at one place for so long, especially a large shop, is that you really only get exposed to one way of doing things.  And while I appreciate everything I learned during my time there, I knew the only way to push my skillset to the next level was to move on.  So when this opportunity presented itself, I jumped on it.

I won’t go into details here regarding my new employer, but suffice it to say they’ve been keeping me busy.  I’ve already learned a lot of new stuff, and I’ve been brushing up on my somewhat rusty Oracle skills.  Since I use this blog in part as a way to record what I’ve learned for later reference, as well as to solidify it in my head, I’ve been thinking of how I can incorporate the Oracle stuff.  I know a lot of us out there support both Oracle and SQL Server, and there are quite a few reluctant “accidental Oracle DBAs” that may find the information useful, too.  And there just doesn’t seem to be the same number of good Oracle blogs out there like there is for SQL Server.  Maybe a separate blog is the way to go, or perhaps a separate page.  I’d prefer to keep it all on the same domain.  Perhaps I’m overthinking it, maybe it should all be mixed together and if you aren’t interested in the Oracle stuff, don’t read it.  I’d just need to update my syndication feeds.

And then there’s life.  My youngest brother got married and we had a fun trip up to Buffalo to celebrate with the family.  Two of my best friends moved across country, and there were numerous social activities in order to squeeze every last drop of fun out of them before they left.  Last week we spent an evening at the Severance Hall where they showed Charlie Chaplin’s Modern Times while the Cleveland Orchestra played the original score.  As much as I love old movies, I’d never seen any Charlie Chaplin films before.  It was so much fun.  We splurged on box seats, so now I’ll be spoiled for anything else.

The holiday season buys me some slack, I’m sure.  After all, I did bake 22 dozen cookies this weekend (8 dozen rugelach, 8 dozen pecan tassies, and 6 dozen sugar cookies, if you’re wondering).  Everyone is busy this time of year and I’m seeing a lot of blogs “go dark” until the new year.  So I’ll probably be quiet a bit longer, but hopefully you’ll still be here when I return in January. 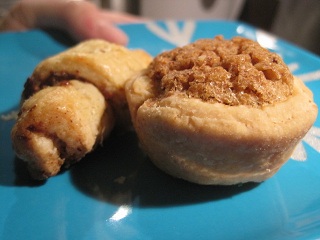 5 thoughts on “Long time no blog…”