This post is part of a series on this blog that will help me, and hopefully you, pass exam 70-463: Implementing a Data Warehouse with Microsoft SQL Server 2012.  So far, we’ve covered:

Today we’re going to review dimension tables in more depth.  As I stated last time, dimension tables store qualitative, or descriptive data.  For example, the DimCustomer table in the AdventureWorksDW2012 database stores information about each customer; data like first and last name, address, income, marital status, and number of children.  What DimCustomer does not store is any information regarding a customer’s previous purchases. 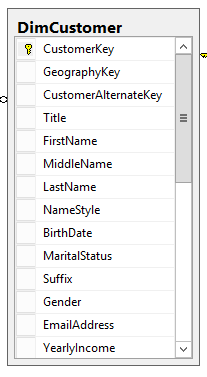 The DimCustomer dimension table in AdventureWorksDW2012

What may not be obvious right off the bat is that there are several types of columns in a dimension table.  And each of these column types has a purpose.

Keep a data warehouse around for long enough and you’re eventually going to have to update your dimension data.  Customers move, products are discontinued, employees are promoted. How you decide to handle those updates will have a big impact on whether you’re able to report on historical data.  Let’s go back to the DimCustomer table.  Customer 12345, aka Alison Raje, lives in Townsville, Queensland, Australia.  But suppose Alison was offered a job in Chicago and decided to move.  Alison’s row in DimCustomer needs to be updated to reflect her new address, but how?  This is known as a Slowly Changing Dimension (SCD), and there are a few options.

The business users will have a big say in what type of SCD you implement in your data warehouse.  And keep in mind that Type 1 and Type 2 aren’t necessarily mutually exclusive.  Depending on the data, you may be ok with overwriting history on some columns, but need to maintain history for other columns.

Today we covered dimensions in more detail, including the different types of columns that make up a dimension, and how we can handle updates to dimension data.  Next time we’ll look at fact tables in more depth.